A while ago, I decided to buy a new computer. I had three main requirements:\

I’ve tested various ways of getting a quiet computer over the years, the most famous one being the beautiful red box described here. This time, I did however go for a more standard solution that involved less red paint..

After some research on quiet computer cases and power supplies, I ordered the following stuff.\

The first thing I noticed about this case when I collected it at the post office was that it is very heavy. Another thing I noticed when taking it out of its cardboard box was that when you knock on one of the sides of it, there’s much less sound than when knocking on the side of a standard case. This comes from the fact that the sides are covered in plastic instead of being just steel, and I think it contributes much to keeping the computer quiet, as vibrations are less likely to travel through the sides of the case. \

Opening up the case 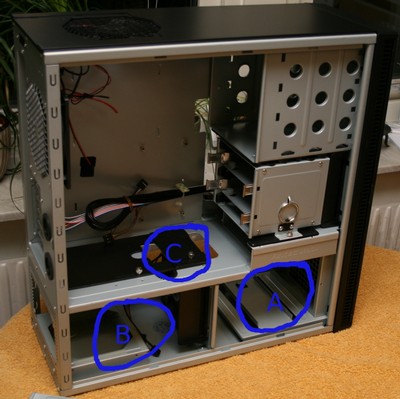 What is very interesting is that Antec has chosen to divide the flow of air into two distinct flow paths. There is the lower airpath where air flows from the front, through an air filter that can be easily removed for cleaning, then through the lower drive bay, via a 12cm fan that can be individually controlled via a speed controller attached to a small cable, and then finally through the power supply.

Then there’s the upper airpath where air flows from the front, through a second washable air filter, into the upper part of the box exiting through one of two 12cm individually controllable 12cm fans. The two top fans are controlled by external fan switches at the back of the case, which allows adjustments of speed without opening the case. For my configuration, I run the back fan at its lowest speed. I have not connected the top fan at all.

The area marked with C is a special plastic slider that ensures that as little air as possible travels between the upper and the lower air paths, while still allowing cables to be run from the power supply up to the motherboard and other parts requiring power, and also down to the lower drive bay to power the hard drives.

The right side of the case

On the other side of the case, we see another neat feature - cable ties to keep cables running from the power supply to the motherboard secured.

There’s a lot of smart solutions in this box. Here’s one example - the ring used to pull out the lower and upper drive bays have a small plastic snap that keeps it down when not used - avoiding any chance of it vibrating causing noise!

The Antec P182 is sold without power supply unit (PSU). That gives the owner flexibility in finding a PSU that fits with the requirements.\ \ 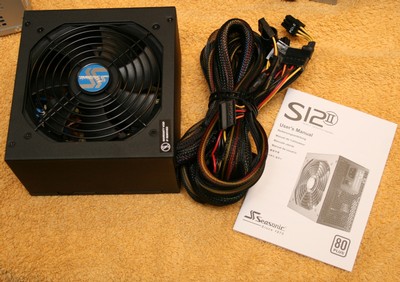 For my new computer, I choose a 380W Seasonic S12-II based on recommendations in a local forum. There are many power supplies specifying that the fan is temperature controlled, but in reality, many PSUs have really crappy fan controllers that keep the fan at higher speed than necessary, causing noise. \ \ Like the Antec P182, the S12 has an aura of quality. It has a nice black finish, and the outgoing cables are neatly organized. \ \ The PSU claims that it is very power efficient, which means that a lot of the energy going into the PSU actually comes out. This is not the case with cheap PSU’s, where a lot of energy is wasted in the conversion from high voltage AC to 12 and 5V DC. The energy wasted generates heat, which has to be ventilated. So, an efficient PSU not only saves your electric bill, it also makes your computer more quiet! 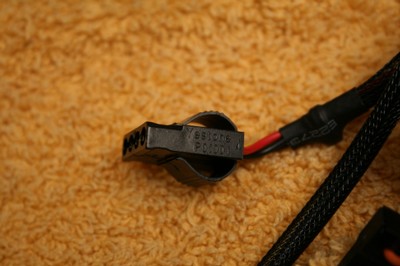 \ Here’s a really nice feature - the 12V standard connectors for connecting for example old harddrives, DVD readers, etc, are of a special make that are much easier to disconnect.

Seasonic S12-II is a PSU I can recommend.